Five days before Christmas 2020, at 10:36 on a Sunday night, our rainforest cottage trembled as a large earthquake struck the island of Hawaiʻi. My wife Catherine Robbins and I dashed to our computer to check the quake’s location and magnitude on the Hawaiian Volcano Observatory’s Kilauea website page. But it wasn’t the big red dot pinpointing the temblor on Kilauea’s southern flank or its 4.4.magnitude that took our breaths away. It was HVO’s webcam image of fiery illumination above the year-and-a-half-old water lake inside Halemaʻumaʻu crater. (All photos by Tom Peek unless otherwise attributed.) 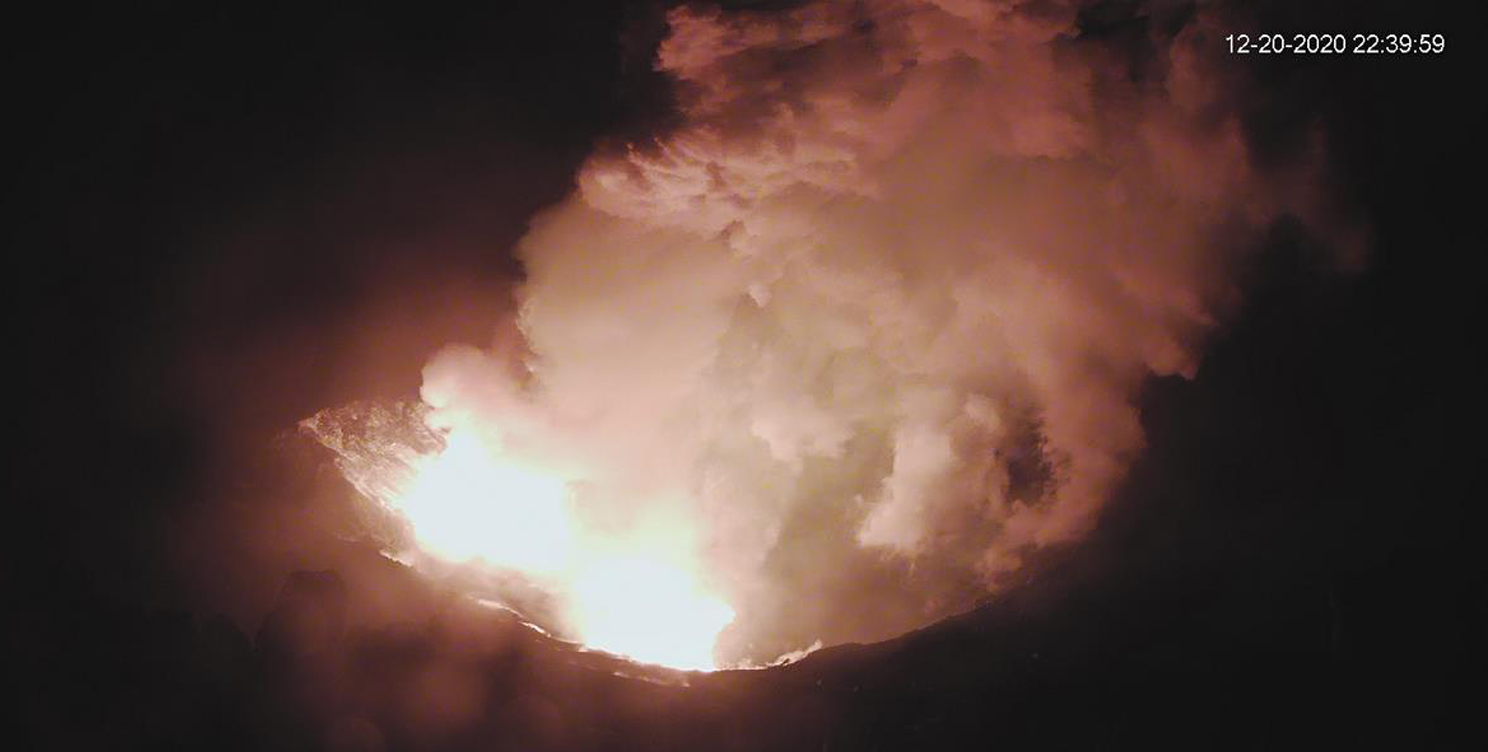 “We have an eruption!” I shouted.

“Pele has returned to the summit!” Cath said, referring to Native Hawaiians’ volcano deity Pelehonuamea (Pele of the sacred land).

Twenty minutes later we were out the door with our camera, binos, rain jackets, power bars and plenty of water—along with Cath’s tea and my Diet Pepsi to rouse our sleepy selves. What we didn’t know yet was that the eruption had actually begun about an hour before the quake, at 9:30 p.m.

By the time we reached Highway 11—around eleven o’ clock—a stream of vehicles carrying scores of people, many from Hilo alerted through early social media reports, had already ascended the volcano and were on their way into Hawaiʻi Volcanoes National Park. The sky above the park was bright orange. Minutes later we passed through the unmanned entrance station and headed toward the Kilauea Overlook several miles into the park. (Only in emergencies is the park—located on a Hawaiian sacred site—not open 24 hours a day, and we breathed a sigh of relief that this eruption hadn’t yet provoked a closure.)

Our first view of the 2020 summit eruption from a less trod trail on the caldera’s north rim.

We abandoned the long line of vehicles heading to the popular overlook for a lesser known trail where we knew we’d find good viewpoints without crowds. What awaited us—the goddess Pele finally home after more than two years away—was spectacular! With deep emotion we thanked her for returning. Though we were more than a mile from Halemaʻumaʻu and the eruption was hundreds of feet below its rim, we sometimes faintly heard what was either boiling water, sloshing of a new lava lake or lava spewing from the fountains that fed it. (We later learned that three fissures on the crater’s slopes above the water lake had erupted that first night, at times fountaining as high as 165 feet, and that the 167-foot-deep lake had quickly vaporized).

Before long, our semi-private perch began to crowd with people who had also given up on driving to the already packed Kilauea Overlook. Our Covid-19 masks came on, and we noted ironically that during previous eruptions we’d witnessed—most often as park rangers—we’d also worn N-95 protection (in multi-filter Park Service respirators) but our concerns back then were sulfur dioxide and tiny bits of glass not a virus.

“Time to move on,” we agreed, to an even more remote location.

Catherine walking a long-abandoned stretch of Crater Rim Drive to a viewing spot on the caldera’s south side.

About half an hour later we arrived by car at the trailhead leading to a spot on the south side of the vast caldera—Kaluapele (the pit of Pele)—and directly opposite where we’d just been. The orange glow was more intense and widespread than on the north rim. Now downwind and much closer to Halemaʻumaʻu, the eruption’s volcanic chorus was louder, more distinct and almost constant.

A few people had gathered near an old park overlook commemorating a 1974 fissure eruption, including a woman keeping the mist at bay with an incongruous umbrella.

Only a few people had gathered at this distant locale, and we sat down on a ridge of old spatter where we’d observed Pele’s marvels on many previous nights and near where Catherine had often taken field photographs and drawn sketches for her oil paintings. There, we quietly took it all in.

We observed the new eruption from a long-favored spot of ours. (Photo of Tom by Catherine Robbins) 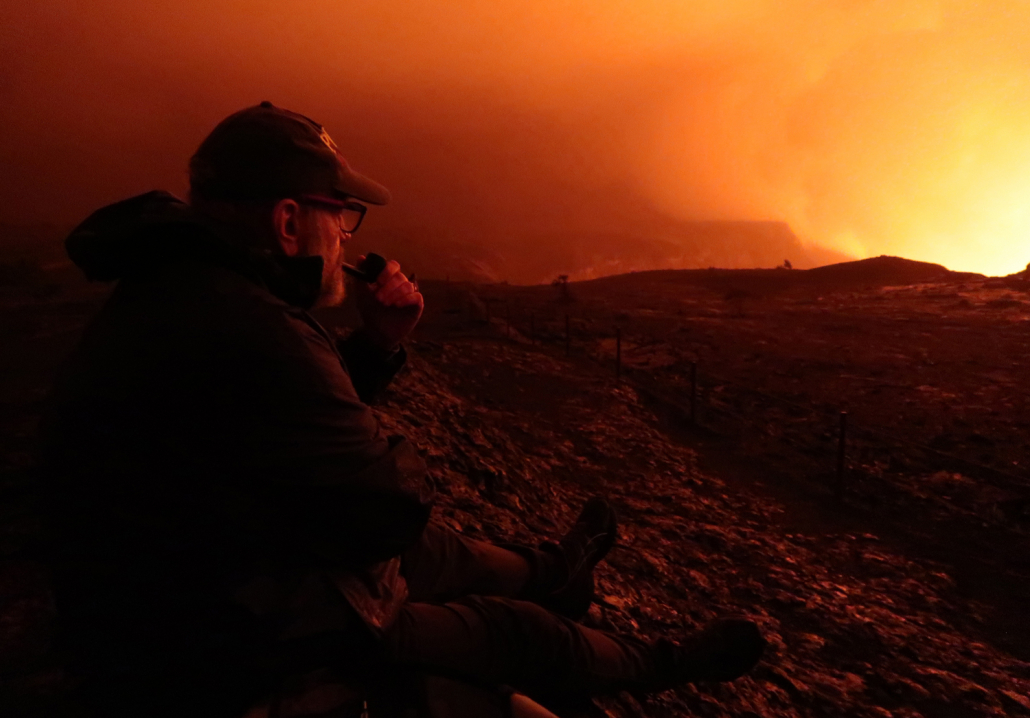 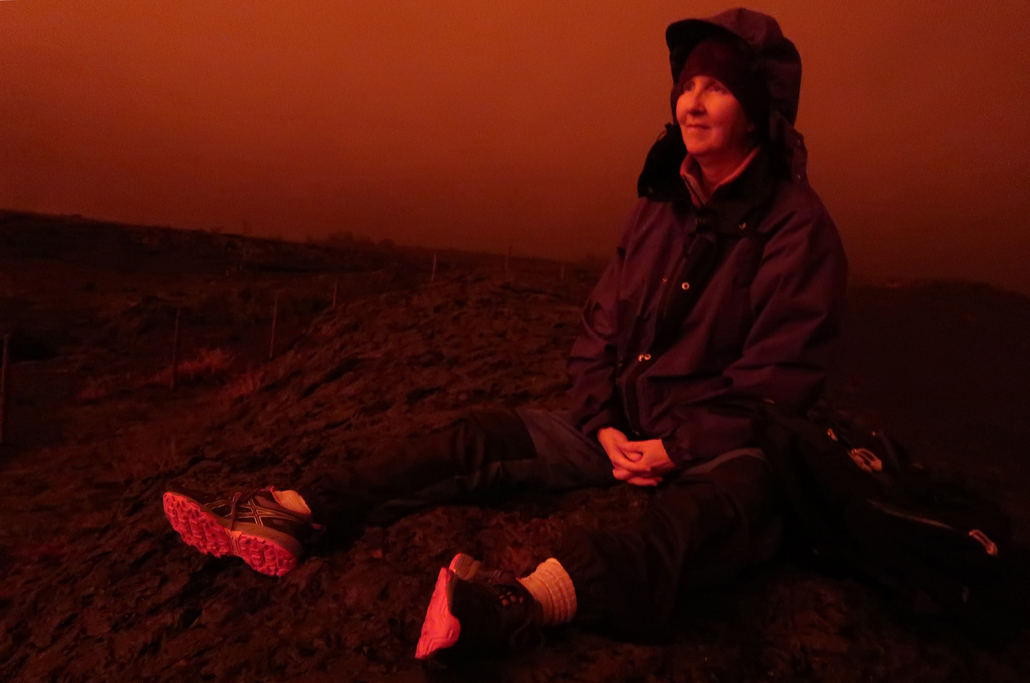 As longtime Hawaiʻi Island residents and former eruption rangers, we had from various places witnessed Pele’s many moods and her constant rearranging of the island’s landscapes. That night her mood seemed both forceful and sublime. 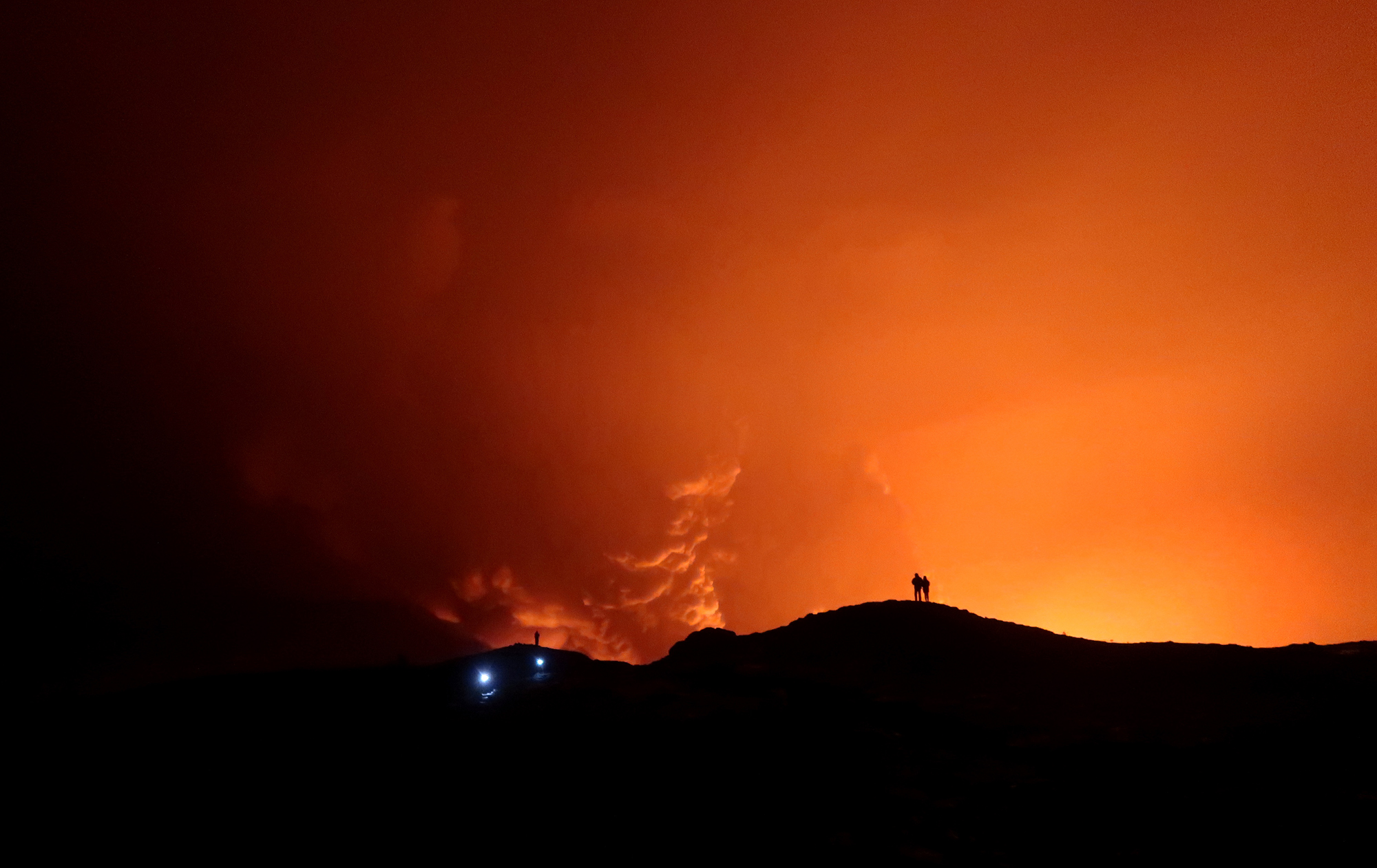 A colossal plume of steam, ash and gas rose suddenly inside the glow, sending several visitors back inside the park’s safe-viewing area.

Moments later her abiding power suddenly emerged as a colossal plume of steam, ash and gas, towering above a distant spatter ridge where several people had trekked beyond the park barricades. All but one transfixed couple departed hastily, their lamps, quickly lit, jiggling as they made their way across the crusty, broken lava. The sudden explosion startled even us, with our thousands of hours of intimate time on the volcano, and our reverie heightened. Even so, and though we were more than a mile from the explosion, we consolidated our gear and identified an escape route in case Pele began sending up more than steam and ash.

“We’ve been blessed.” Catherine said ten minutes later. “Let’s not be greedy. Time to head back.” I agreed. 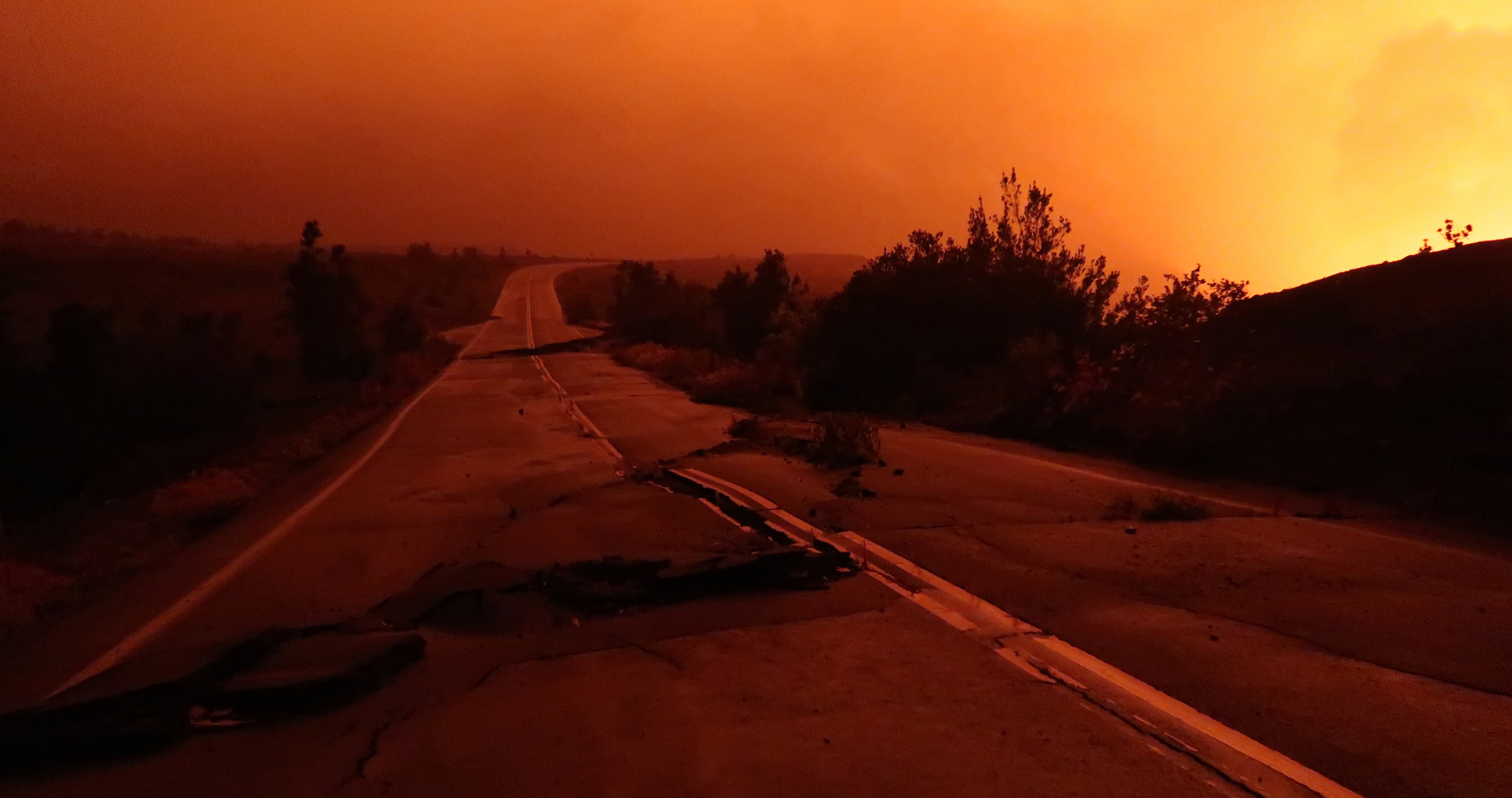 The ruin of Crater Rim Drive on the south side of Kaluapele.

Leaving the area, we stopped briefly at the prophetic ruin of a park road that once circled Kaluapele, abandoned in 2008 when an explosive eruption opened a vent in Halemaʻumaʻu that rained down rocks, ash and Pele’s hair. That vent eventually supplied magma to a lava lake that resided there until 2018. That’s when Pele took her lava to lower Puna, completely transforming that coastal district and destroying 700 homes and other structures. As the magma reservoir drained beneath Kaluapele, Halemaʻumaʻu and much of the caldera had collapsed in a slow-motion torrent of earthquakes and explosions that daily shook our home and tore apart the long-abandoned park road.

We made one final stop before leaving the park, a brief visit to the Kilauea Overlook, which we assumed by then—at 2:30 a.m.—would have far fewer people.

People gathered at the Kilauea Overlook in the wee hours of the eruption’s first night. 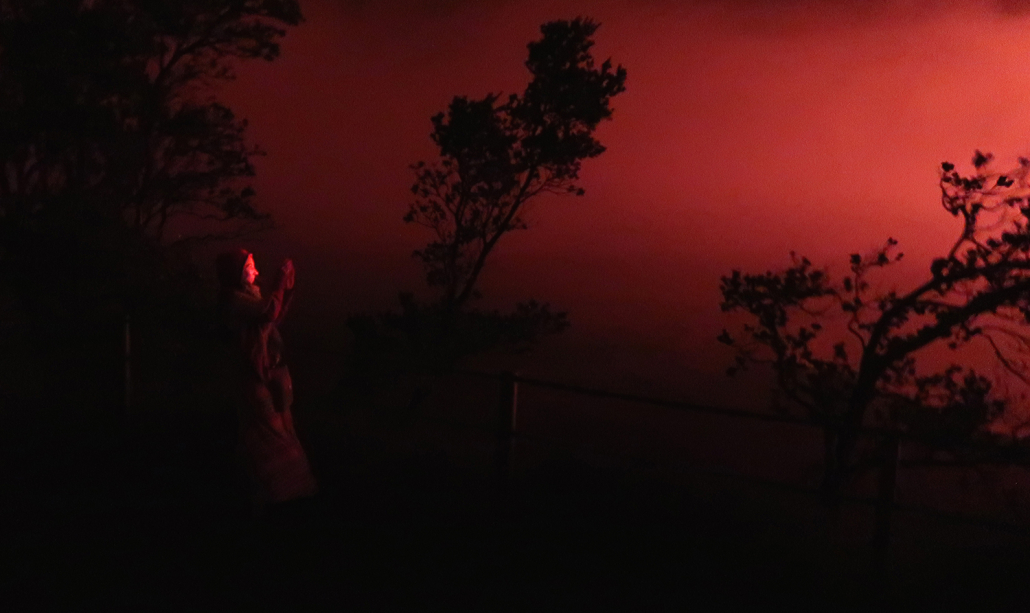 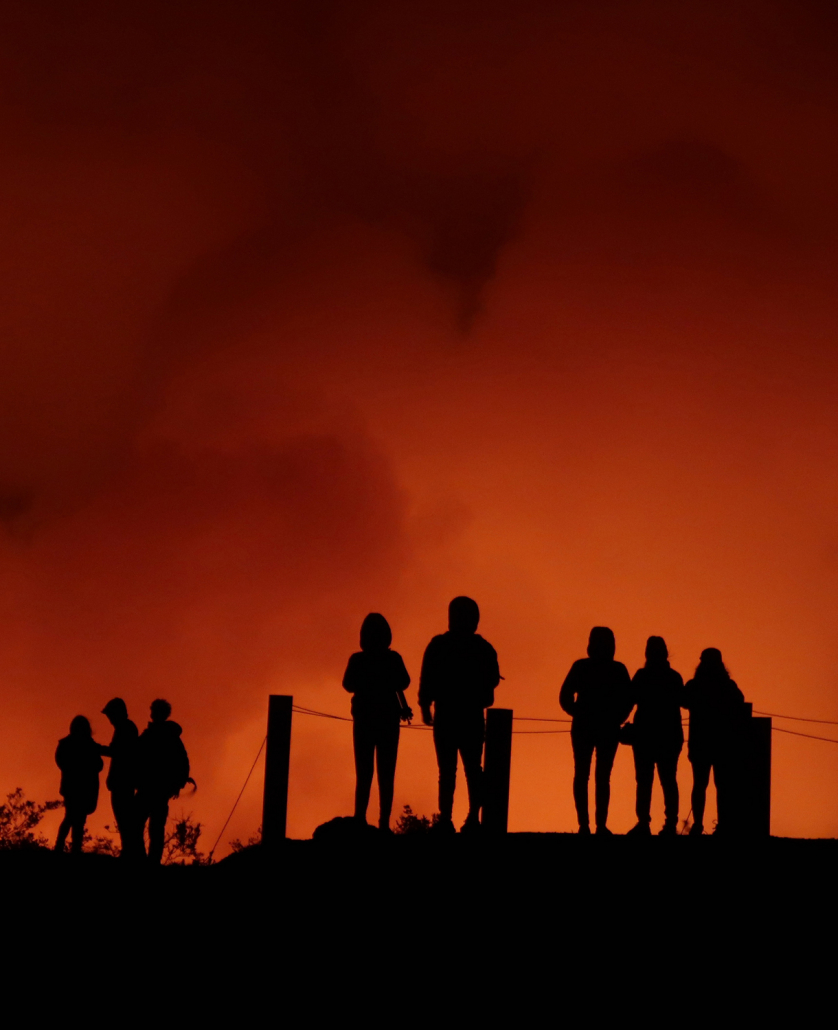 Dozens were still viewing the eruption at the Kilauea Overlook when we arrived, including many young people. Awestruck, the crowd watched respectfully as Pele’s brilliant plumes danced above her legendary home at Halemaʻumaʻu.

Pele dancing in front of a lehua-blossomed ʻohia tree on the rim of Kaluapele.

In the weeks that followed that magical night, the lava lake continued to grow—by mid-February to over 700 feet deep!—and the early vents consolidated into a towering spatter cone above the lake. Catherine and I have returned to the caldera rim many times to view the changing spectacle, and on some nights we even see Pele’s distant auburn glow through the rainforest trees above our lanai.

For the best updates on the eruption, visit the USGS Hawaiian Volcano Observatory website and Big Island Video News (our local web-based television station), including its excellent reporting from that first night.)