The Big Island of Hawaiʻi—with its Native Hawaiian traditions, exceptional ethnic diversity, dramatic coastal and volcanic landscapes, and unique ecology—is an extraordinary place, but never more so than when our volcanoes erupt and blizzards drape our highest peaks with snow. Both happened this winter! It started with a new summit eruption at Kilauea on December 20 followed by heavy January and February rains that deluged the island’s lower slopes and brought blizzards to its 14,000-foot volcanoes, Mauna Kea and Mauna Loa. 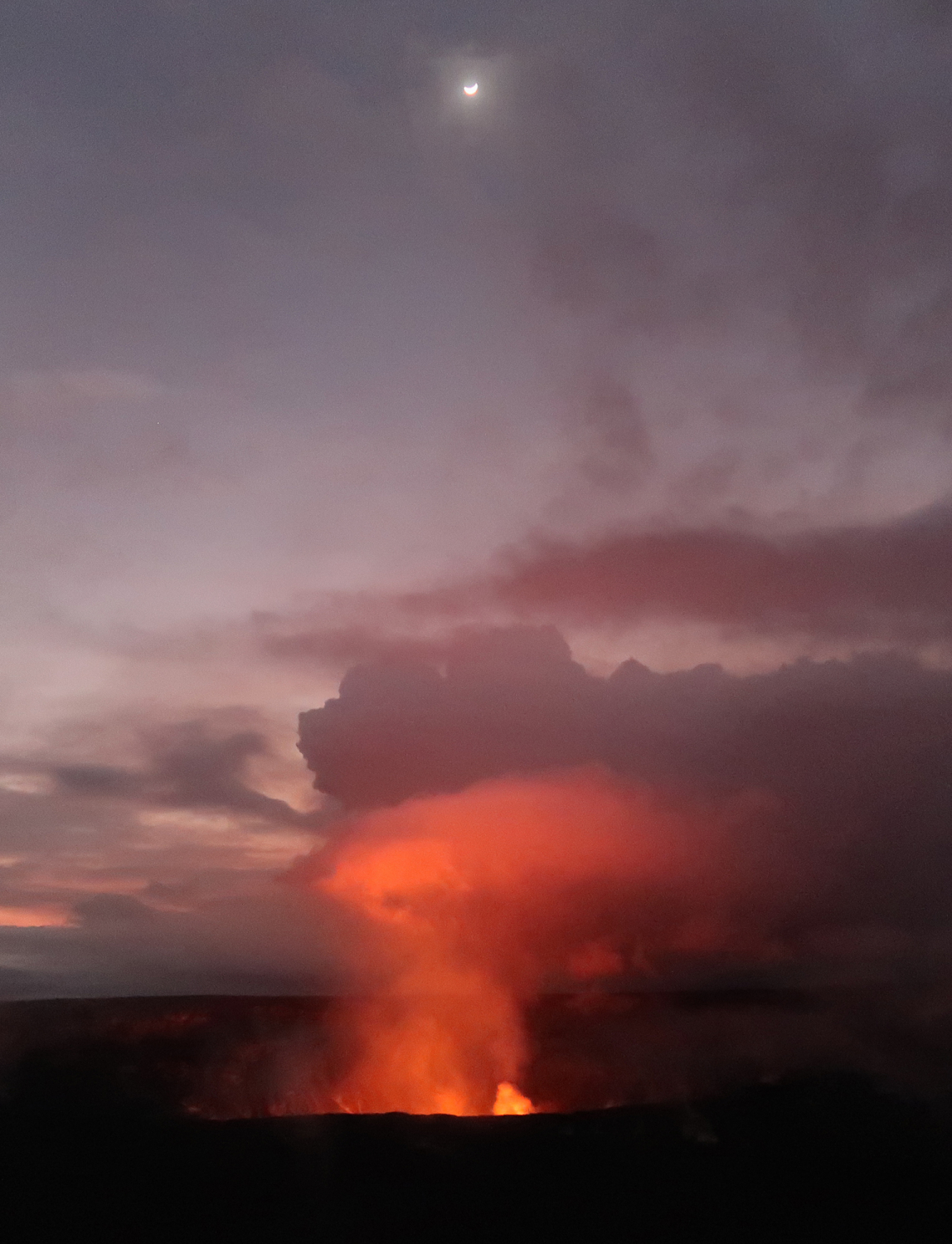 The moon—“Mahina” to Native Hawaiians—smiling above Kilauea’s eruption on January 16. 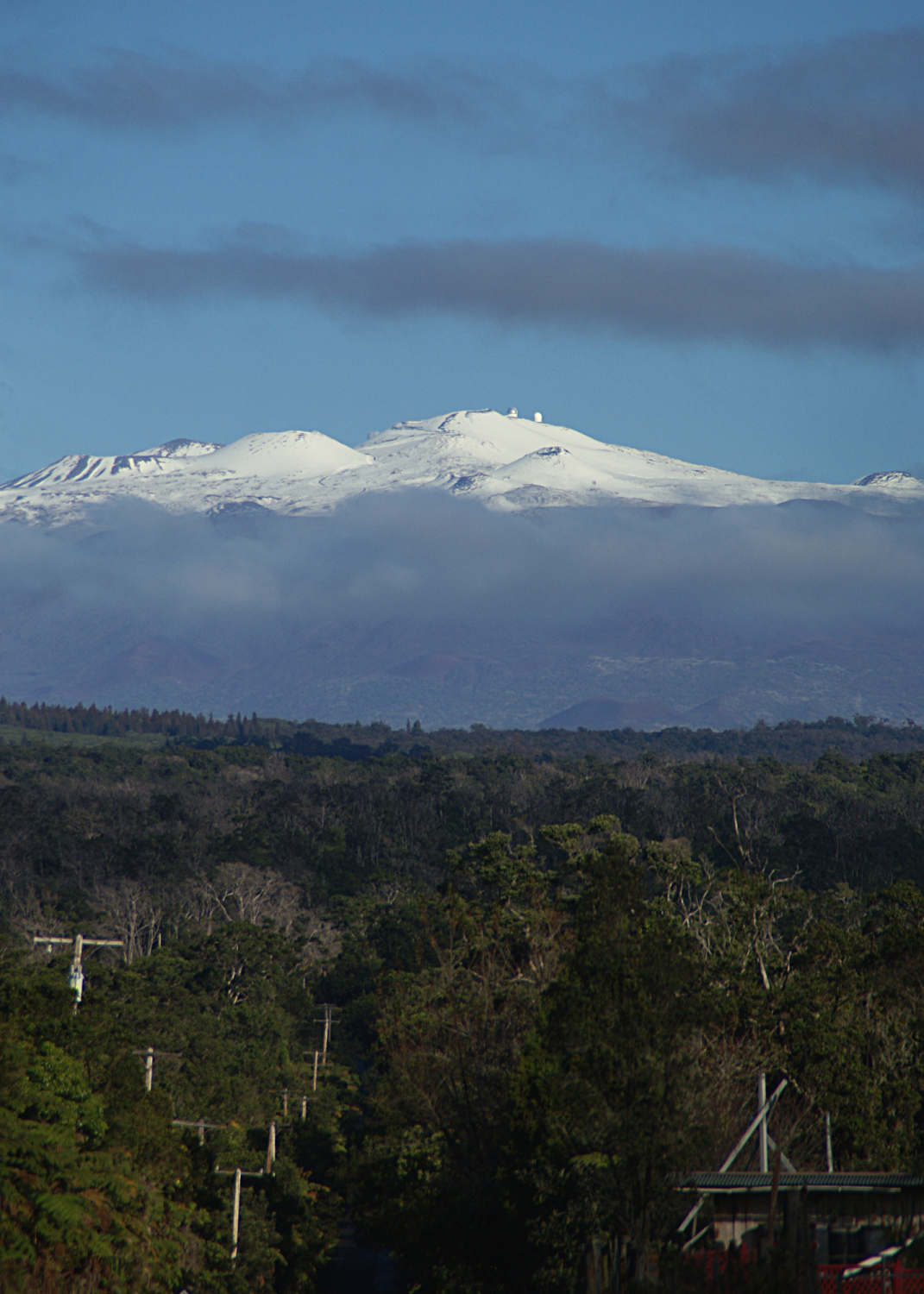 A blanket of fresh snow covering the upper three-thousand feet of Mauna Kea on January 28.

For my Native Hawaiian friends and many other islanders, the lava’s return to Kilauea and snow appearing on the mountains mark the bold presence of two potent female deities—the volcano goddess Pelehonuamea (Pele of the sacred land) and the luminescent goddess of snow and ice Poliʻahu, two of the archipelago’s time-honored nature gods. Like other indigenous cultures, traditional Hawaiians acknowledge the forces of nature with respect, deference and gratitude. They recognize that nature, not humanity, is the dominate force on our planet, and that its natural dynamics must be embraced with a coexistent attitude rather than resisted, disparaged or defiantly exploited in the delusionary belief that humans’ duty and right is to rule over these forces. It’s a perspective sometimes difficult to grasp by people raised in Western industrialized societies. But the fiery glow above Kilauea and the sparkling rim of snow atop Mauna Kea and Mauna Loa are reminders of our humble, albeit important, place in the planet’s great web of life. 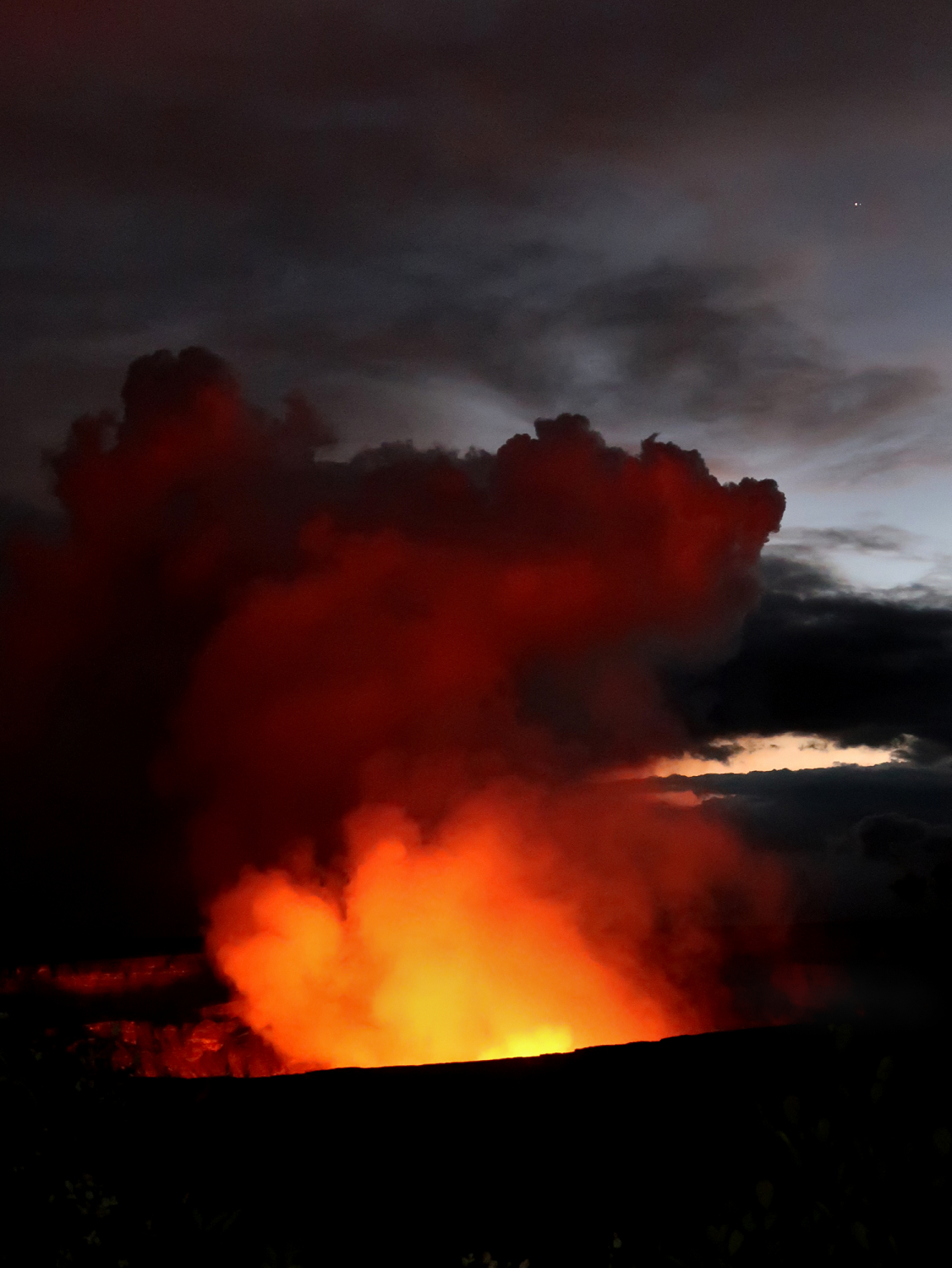 Pele dancing below the Great Conjunction of Jupiter and Saturn (upper right) on December 21. 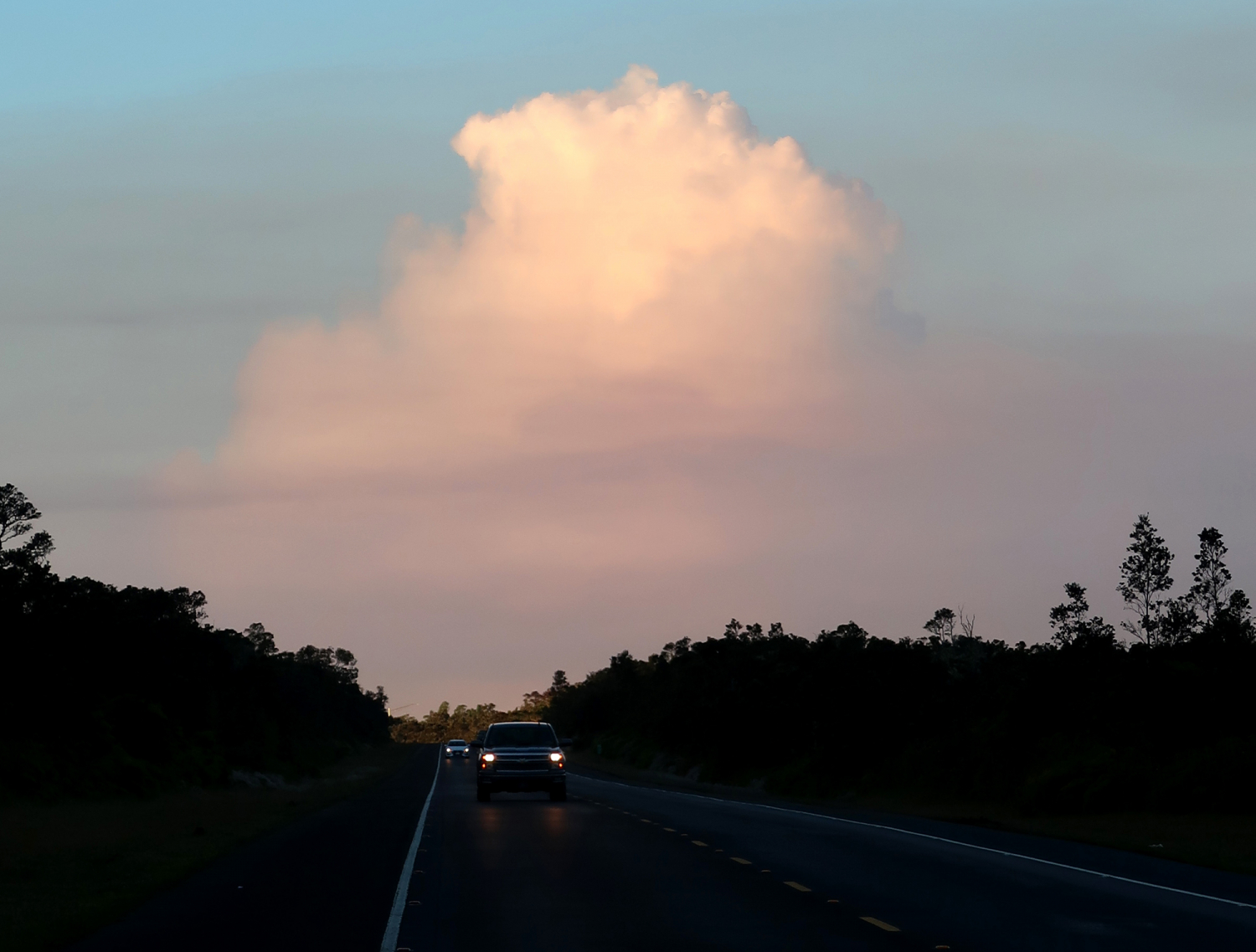 The eruption’s colossal gas plume still loomed high above Kilauea three days after the start of the new eruption, seen here a few miles below Volcano Village on the morning of December 23.

While Pele can sometimes be destructive, she is viewed by Hawaiians as fundamentally a creative force responsible for building the Hawaiian Islands, a force of change that continually alters the landscape with new land. To gaze upon her nightly glow is to remind us of a fact many Westerners also find difficult to accept—that all things are impermanent and that much of human meaning and the efficacy of cultures comes from periodically adjusting our aspirations and habits in light of that truth. Trying to halt an encroaching lava flow is as futile as trying to stop climate change without finding a new way to live without fossil fuels.

Mauna Loa’s broad slopes capped with snow on January 28, as seen from a cattle ranch on the outskirts of Volcano Village, about 4,000 feet up the mountain.

Poliʻahu is one of several mountain deities that represent the life-giving properties of pure water, essential to sea-bound island societies. Because pure water can never be taken for granted on islands, the fight for its protection and fair distribution has been fiercely controversial in Hawaiʻi since its colonization two hundred years ago and the flood of development that it unleashed. Poliʻahu’s blessing of snow on the island’s pinnacles—visible even from other islands—reminds us that the planet’s pure waters are one of its most important gifts. Seeing her pristine snow stirs us to rethink our continued faith in the last two hundred years of techno-industrial development that has contaminated so much water that more than a billion people no longer have clean water to drink, bathe and cook with.

These are some of the thoughts that enter my mind when, seeking enchantment, I venture out at night to watch Pele’s auburn glow or rise early to catch the sun’s first light on Poliʻahu’s icy mantle. Being reminded of our true relationship with nature—and the human foibles that challenge it—evokes for me an even deeper enchantment about our wondrous life-giving planet and the urgent need for us to revere it, as my Hawaiian friends do.

My wife Catherine Robbins watching the eruption from the caldera rim of Kilauea on New Year’s Eve.

Mauna Kea: cultural clash far from over
Scroll to top