By the time I came to maturity in the mid-1970s, the post-World War II Beat Generation literary movement had all but vanished in the public mind, supplanted by hippies, rock and roll, the New Left and a growing counterculture. But the movement’s quest to plant a “new consciousness” for peace, nonmaterialism and racial and economic justice—and its dedication to frank writing about all that—had been seeded throughout post-Sixties America. A key leader in that movement was San Francisco poet, painter, bookstore owner and publisher Lawrence Ferlinghetti, who died February 22, 2021 at age 101. 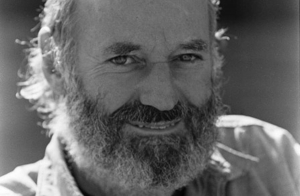 Those writers were honest, brave and often provocative, speaking unvarnished truth to power to foster a more humane consciousness—a far cry from playing it safe with mere “political correctness,” a term invented in the more conformist decades that followed the Beats. And in many cases, it was Ferlinghetti who dared to publish their works. Nowhere is that movement’s commitment to expressing inconvenient truths more vividly illustrated than in Ferlinghetti’s decision to publish Allen Ginsberg’s provocative 1956 poem “Howl” and then challenge its government censorship in court. (For a luscious taste of the Beat’s no-holds-barred approach, watch Allen Ginsberg defend the movement on a 1968 broadcast of conservative William F. Buckley’s “Firing Line” program.)

Some Beats (derisively called “Beatniks” in the mainstream media) were still around when I was in my early twenties—writing their poems, doing art, publishing books and engaged in community activism. Jack Kerouac, of On the Road fame, was already dead, but two of the poets Ferlinghetti had published—Gary Snyder and Allen Ginsberg—were among those still very much alive and kicking. As a budding writer and young political activist, I was inspired by all three men and their paradigm-challenging movement. While a student at the University of Minnesota I saw Snyder and Ginsberg transfix crowded classrooms. Years later, on my first visit to San Francisco, I made a pilgrimage to their publisher’s celebrated bookstore, City Lights Books, wandering its many cubbies of bookshelves, plucking off well-curated titles to buy and take home. 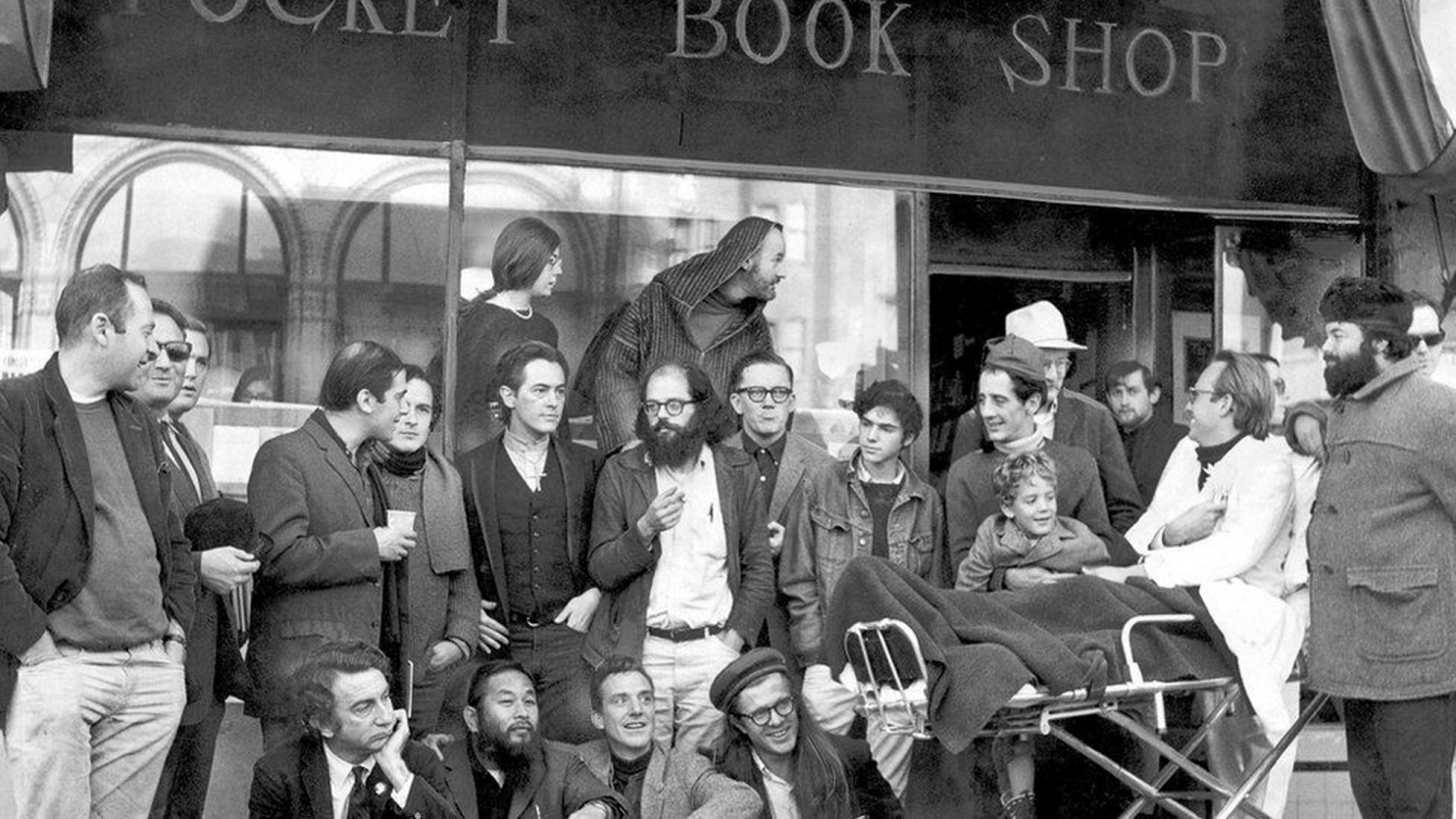 San Francisco poets gathered at City Lights Bookstore in 1965. Lawrence Ferlinghetti is above the group near the window, wearing a hooded smock
(San Francisco Chronicle photo by Peter Breinig). 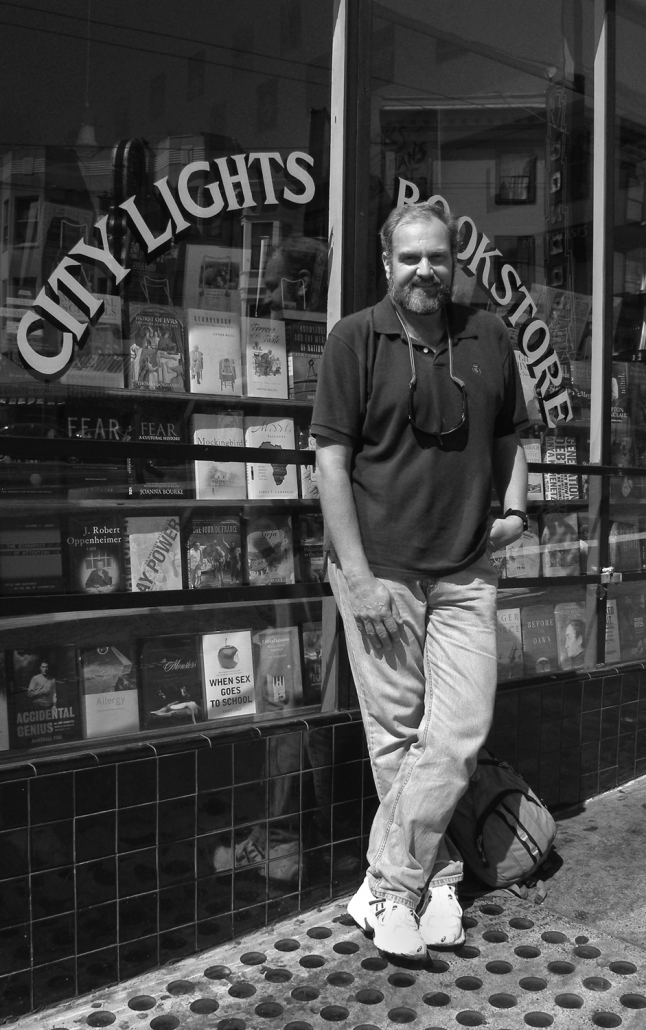 Tom after a 2006 pilgrimage to City Lights (photo by Catherine Robbins).

I have since made other pilgrimages to Ferlinghetti’s bookstore, almost every time I journeyed to San Francisco. Minutes after one of those pilgrimages, while eating focaccia bread drenched in garlic and olive oil next door at the Stinking Rose restaurant, the great literary god strode right past our window, his white beard glowing in the sun! Embroiled in the revision of my own novel, I took it as a sign of encouragement for my literary quest.

Later, during my years-long struggle to find a daring publisher for my tough love Hawaiʻi novel Daughters of Fire, I grew ever more grateful for plucky, discerning publishers like Ferlinghetti, the brave midwife to writers who might otherwise never have been published.

In the Beat’s day, book censorship was largely based on political or societal ideas, not just the ever-present industry concern about marketability. But by the twenty-first century, when I was circulating my manuscript to agents and publishers, the book industry had consolidated into a handful of multi-imprint corporate Goliaths financed by stockholders seeking surefire profit margins, and perceived profitability became the pervasive form of censorship. This has dramatically increased the importance of independent publishers, making them as crucial to our society now as when Ferlinghetti founded his imprint in the staid, paranoid 1950s.

In my case, it was another bold, community-conscious publisher, Arnie Kotler at Koa Books (former publisher and editor of Parallax Press) who midwifed what would become an award-winning novel praised for its frank authenticity. When Kotler eventually sold his imprint, he found a new home for my novel with another innovative independent publisher, long-respected Honolulu house Bess Press, which, like Ferlinghetti, now runs its own fine community-centered bookstore. 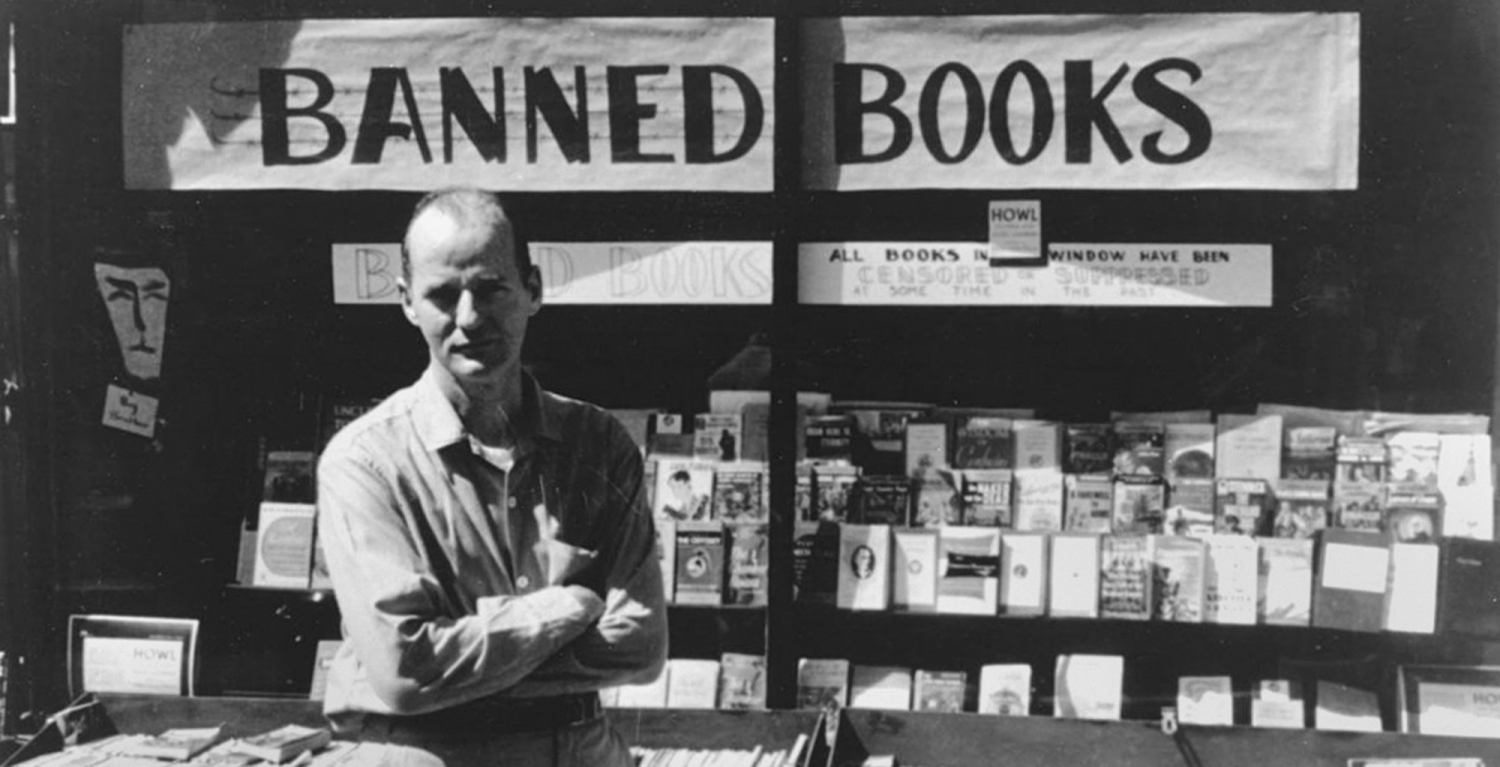 Lawrence Ferlinghetti outside his City Lights bookstore in 1958, shortly after he’d placed Allen Ginsberg’s previously banned “Howl” back on the shelf.

The passing of Lawrence Ferlinghetti reminds us again of the contemporary importance of independent publishers and bookshops to the intellectual, cultural and political health of our society, and reminds me of just how much one can actually accomplish with a combination of guts, persistence, joy and comradeship—along with a salving sense of humor. Here’s a vivid reflection of that in Ferlinghetti’s 1976 admonition to poets in his “Populist Manifesto”:

Poets, come out of your closets,
Open your windows, open your doors,
You have been holed-up too long
in your closed worlds. . . .
No time now for the artist to hide
above, beyond, behind the scenes,
indifferent, paring his fingernails,
refining himself out of existence.
No time now for our little literary games,
no time now for our paranoias & hypochondrias,
no time now for fear & loathing,
time now only for light & love.
We have seen the best minds of our generation
destroyed by boredom at poetry readings. . . .

Ferlinghetti’s sentiments were resurrected shortly after his death in a nice piece by NPR’s Scott Simon, using the Beat poet’s own words to make the point. 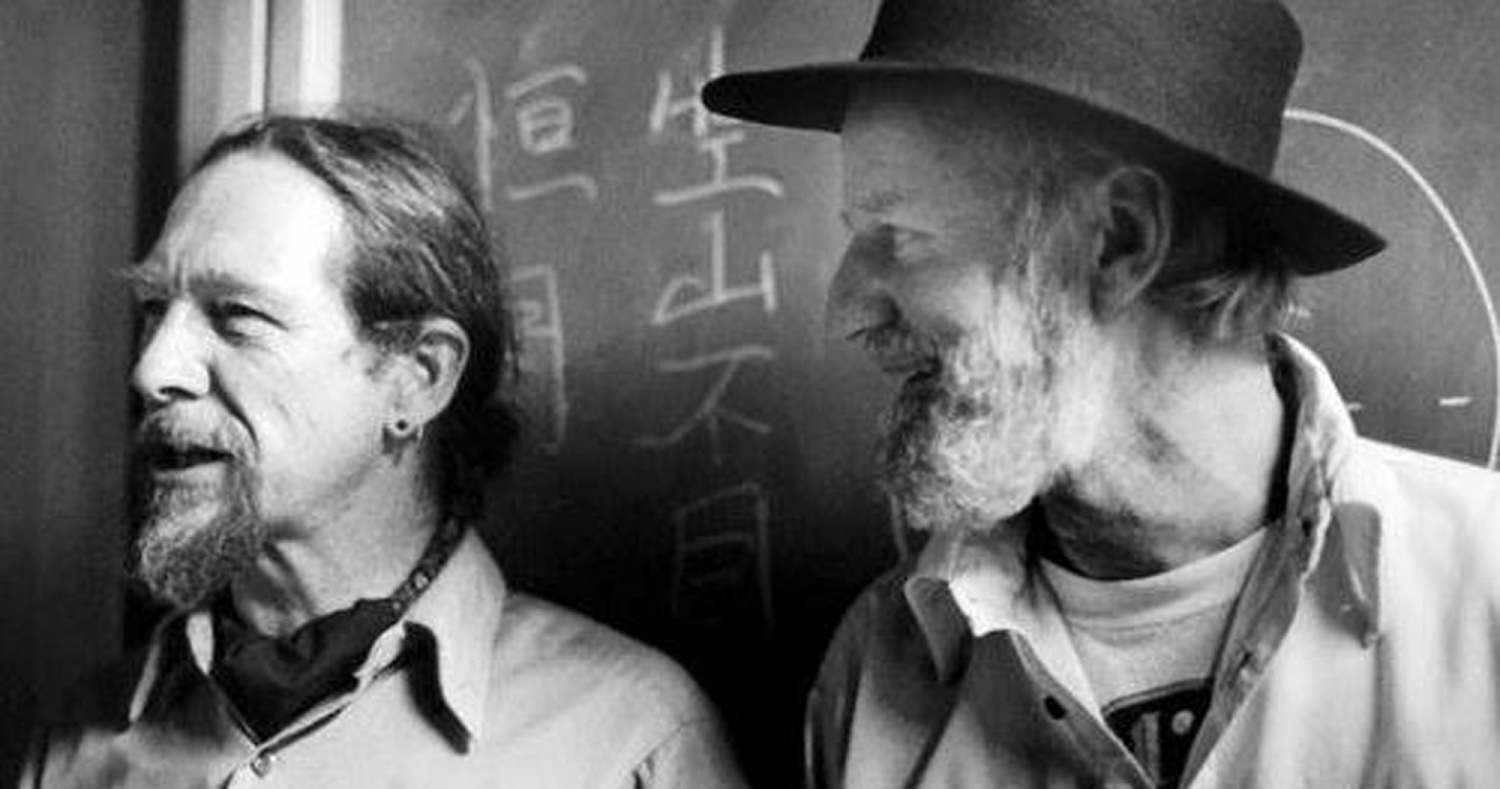 To learn more about Lawrence Ferlinghetti, watch this 2015 feature on the PBS News Hour or this 2019 Democracy Now tribute on his 100th birthday, which includes a wonderful 2007 interview on the same program. And then raise a glass to the Beats and their brave publisher!